This is the first of a number of group posts from the Fashionable Feminist Bloggers community. This group, begun a few weeks ago by a number of fascinating bloggers, examines the intersection of fashion and feminism. If you're interested in becoming part of the group, let me know and I can invite you, or you can request an invitation at the Google group linked above. Our first topic is on Fashionable Feminist icons: each of us was asked to write about a woman who, to us, is a personal feminist/fashion icon (which could be, for example a feminist with great style, a fashion person who also works on behalf of women).

When I started figuring out who I wanted to write about, I was a bit stumped. I realized that I don't have many true "icons" either in fashion or in feminism...so I chose to write about a woman who demonstrates a "feminist" trait I find particularly interesting, the ability to contribute to traditionally male-dominated fields. However, this woman also retained traditional "feminine" dress and activities, and was known for her beauty. As a woman who is a scientist/researcher/artist/student, I am especially interested in examples where technical ability and more traditional performance of femininity coexist in the same person. I don't think that one is necessarily more or less of a feminist for working in male-dominated jobs or female-dominated jobs, for striving for stereotypical beauty ideals or by actively avoiding them. So, I'm writing today about Hedy Lamarr, a major movie star in the 1930's and 1940's, as well as one of the inventors of spread spectrum wireless technology. I first heard about Lamarr in a class I took a couple of years ago on signal processing, and thought her story was fascinating. 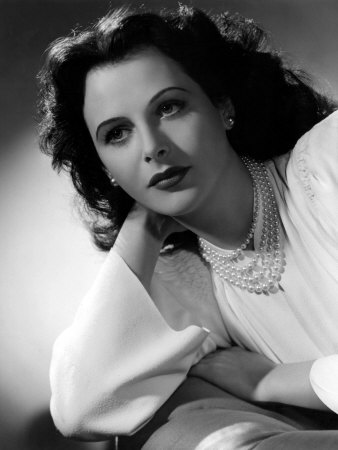 Lamarr was born in Austria as Hedwig Kiesler, first made famous through German and Czech films, and then through her film work in America after she moved to Hollywood in the late 1930's. (She left her first husband, the Austrian Fritz Mandel, as his Nazi sympathies grew, escaping first to London and then to America.) She was particularly known for her good looks: Max Reinhart called her "the most beautiful woman in Europe." George Sanders, who costarred in several movies with Lamarr, said of her, "When I first met Hedy Lamarr, about twenty years ago, she was so beautiful that everybody would stop talking when she came into a room. Wherever she went she was the cynosure of all eyes. I don't think anyone concerned himself very much about whether or not there was anything behind her beauty, he was too busy gaping at her. Of her conversation I can remember nothing: when she spoke one did not listen, one just watched her mouth moving and marveled at the exquisite shapes made by her lips. She was, in consequence, rather frequently misunderstood." So, what's less well known about Lamarr that she was also a mathematician, inventor, and scientist. In particular, she developed of an early form of spread spectrum technology with the composer George Antheil. In Hollywood, Lamarr met Antheil, best known now for his Ballet Mechanique, a composition for dozens of mechanical instruments including 16 player pianos, electric bells and sirens, and airplane propellers. It was World War II, and Lamarr had been thinking of quitting her job at MGM and going to work for the government developing new wartime technologies, like radio control for torpedoes. While she was married to Mandel, she had learned a lot about military technologies, including the ease with which a radio control signal on a single frequency could be intercepted or jammed. Lamarr determined that splitting a signal into many sections and jumping between different frequencies for each section would create a signal that a jammer could not significantly harm; the difficulty would be in synchronizing the sequence of frequencies between the sender and the receiver. Antheil thought that this could be done mechanically, using a player-piano-like roll in each part with timed markings signaling the change to a different frequency. Their patent for this "frequency hopping" system was approved in 1942.

An image from the patent:

The government was skeptical of their system (perhaps especially because of Antheil's comparison to a player piano...so they were supposed to put mini player pianos inside their torpedoes?) Eventually, Lamarr and Antheil's patent expired, without their idea having taken off. However, the military did end up using similar concepts (though implemented electronically, rather than mechanically) during the Cuban Missile Crisis. Now, the "frequency hopping" idea, called Spread Spectrum technology, is used in data transmission, wireless phones, and the government's Milstar defense communication system. Lamarr was finally recognized with the Electric Frontier Foundation Pioneer Award for technological innovation in March 1997. 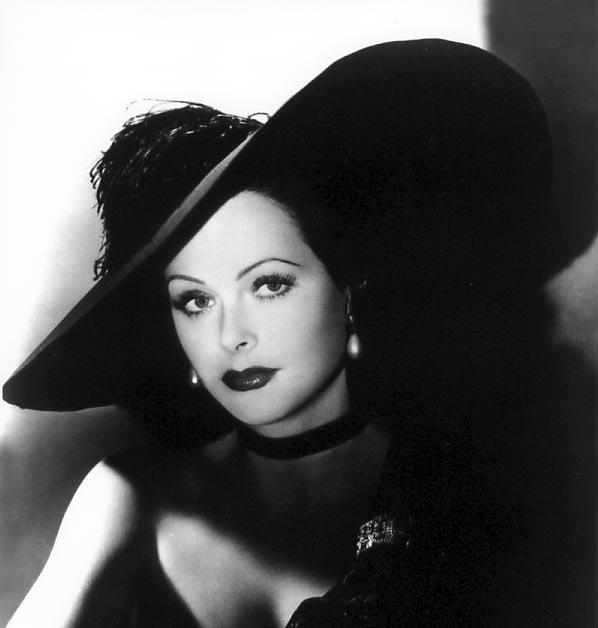 Lamarr never did quit her job at MGM to go work for the military: it was determined that she would be of better service raising money for war bonds as a movie star. (In fact, at one event, she raised $7,000,000!) Lamarr's later life was also complicated, with shoplifting scandals and a total of six husbands. So, perhaps she's not much of a classical feminist. But she did push past the boundaries set on her due to her beauty, and people's tendencies to only look at her exterior, to make some valuable contributions with her technical abilities in a field that at the time (even more so then than now) was dominated by men. 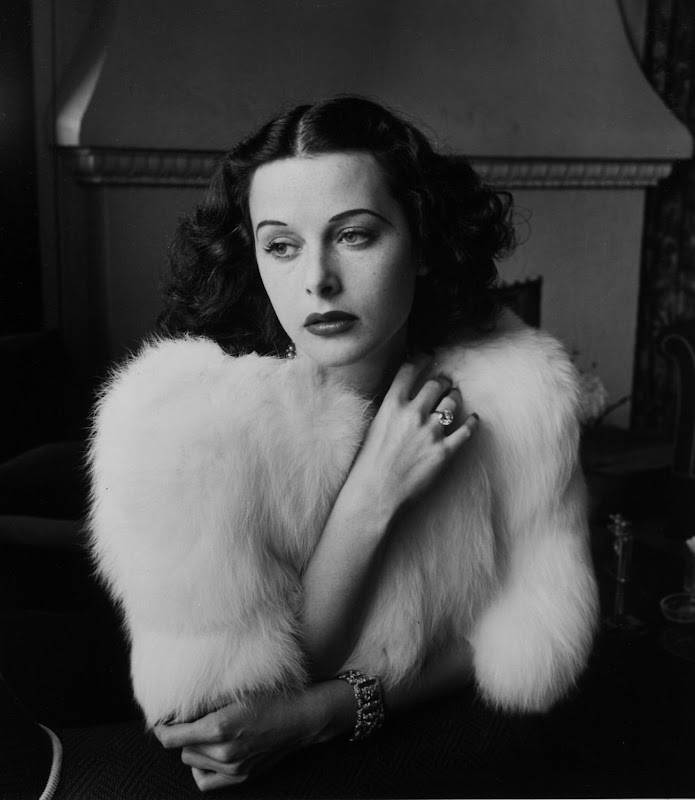 Lamarr also said some interesting things (and some fairly complicated ones, in terms of feminist ideals):

On her own appearance:"My mother always called me an ugly weed, so I never was aware of anything until I was older. Plain girls should have someone telling them they are beautiful. Sometimes this works miracles."

On relationships: "Perhaps my problem in marriage - and it is the problem of many women - was to want both intimacy and independence. It is a difficult line to walk, yet both are important in a marriage"

"I must quit marrying men who feel inferior to me. Somewhere there must be a man who could be my husband and not feel inferior."

On fashion: "I think women are concerned too much with their clothes. Men don't really care that much about women's clothes. If they like a girl, chances are they'll like her clothes."

"Any girl can be glamorous. All you have to do is stand still and look stupid."

On using one's sexuality for success: "The ladder of success in Hollywood is usually a press agent, actor, director, producer, leading man; and you are a star if you sleep with each of them in that order. Crude, but true." 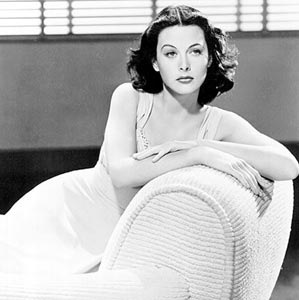 For more information on Hedy Lamarr, I found some nice pieces on inventions.org, madehow.com, and the official Hedy Lamarr website.. 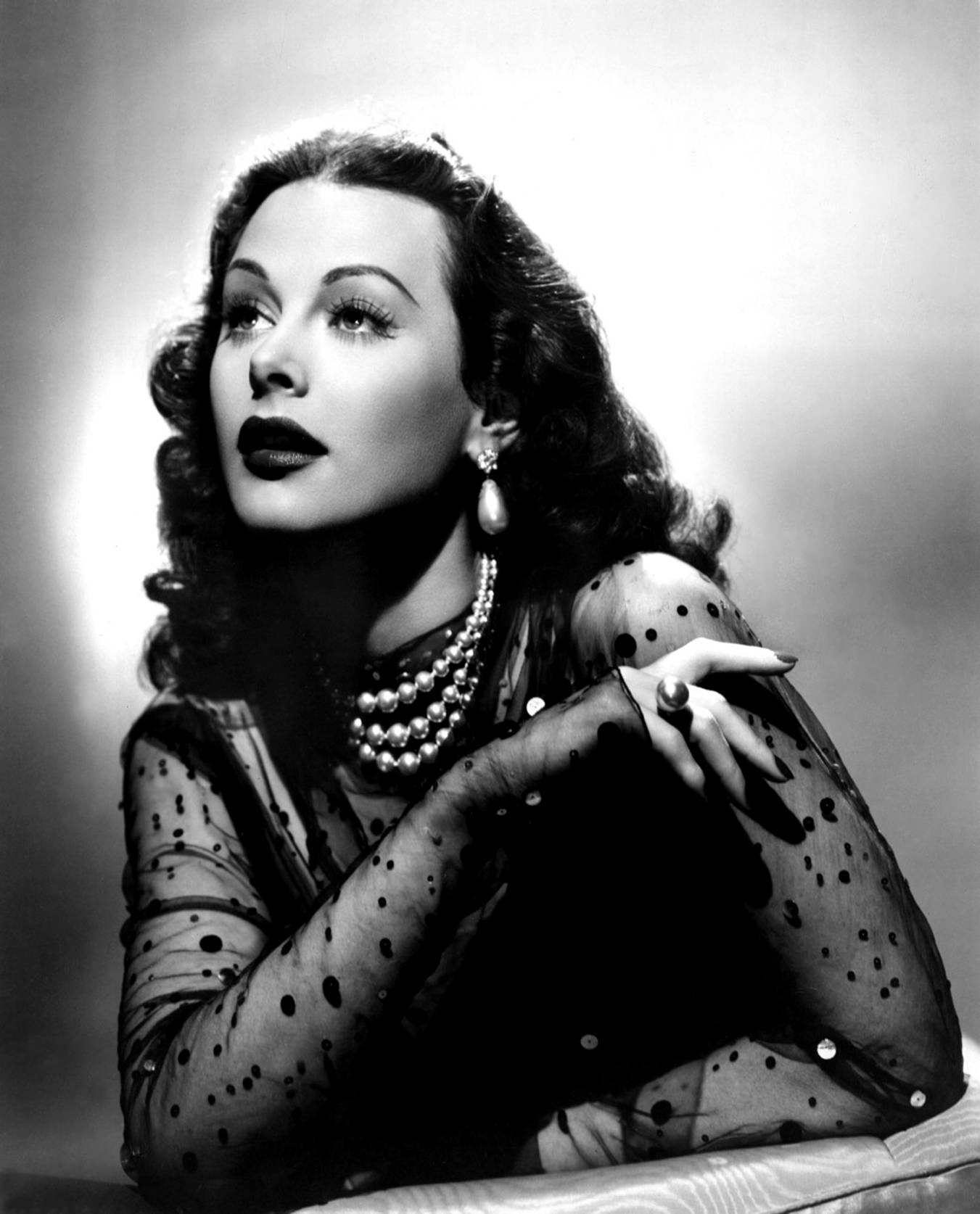 So, what do you think? Is Lamarr an appropriate "fashionable feminist icon"? Can women be stereotypically beautiful, specifically enhance and use that beauty in stereotypical ways, and still do work that leads to feminist goals? (I personally love that her job description is listed on sites as "actress/inventor"!) Why are we (or at least I) still occasionally surprised to find that a great beauty also has a great mind?

Christine Lagarde– Rags Against the Machine

Cindy Sherman - Mrs Bossa Does the Do

Diane Von Furstenberg – For Those About to Shop

Frida Kahlo – Knitting Up the Ravelled Sleeve of Care

Gloria Steinem - What If No-One’s Watching?

Grandmother – The House in the Clouds

Marjane Satrapi - Jean of all Trades

Margaret Cho – What Are Years?

Vivienne Westwood - Seamstress Stories
Posted by Elly at 11:30 AM

Absolutely! More must be done to dismantle the idea that a woman can only be either smart or beautiful. More must also be done to address male (or everyone's) insecurities towards such women (which only serve to make everyone's lives harder) and render them unnecessary.

I only knew Hedy Lamarr as an actress and I find it fascinating to find out all these additional facts about her. And I can relate to most of her quotes in some way - despite some being problematic for present-day feminism (I'm guessing you take issue with the focus on how important beauty and male approval are for a woman, and the tinge of objectification in the last quote?), for her era they seem really insightful, even ahead of her time and challenging its standards. Clearly she was really, really smart!

Thanks for this post. I was not familiar with Lamarr. She's really impressive (managing to make it to the top of an appearance-based profession and remain a scientist and inventor). Two extremes perhaps, but real people are multi-dimensional. She's a great example - and was ahead of her time.

oh wow, she sounds fascinating. How wonderful for her to have hollywood glamour and film making and then go away and push the boundaries of science! What a great choice!

Nice choice! A woman who left herself be smart and beautiful, she seems to me to have been comfortable with herself and what she had to offer the world. I'm glad to have learned more about her!

Thank you for listing all the contributors, I'm taking a tip and updating my post with the same info, better late than never!

For my shame, I'd not heard of her before. What an inspiring woman.

I've so been looking forward to reading this post - love it! I've always thought she was an incredible beauty, but had no idea about her inventions. It's fantastic that, as you say, she pushed the boundaries of expectation. She also sounds incredibly canny - like Marilyn Monroe after her, she knew how people underestimated her.