Well, Irene has come and gone and fortunately seems to have left fairly little damage or trouble in her wake around these parts. We had a lot of rain and wind...some tree branches and entire trees down here and there, but I didn't lose power or anything. Basically a quiet stormy weekend, ideal for the making and consuming of large quantities of eggplant Parmesan and zucchini bread. (Doesn't everyone else cook ridiculous amounts of food when stuck at home?)

Yesterday's outfit started with a blue floral scarf from a swap with the lovely Michelle. I'd been saving this scarf intending to use it as a faux turban (like in this tutorial from Keiko Lynn), but every time I tried that, it didn't quite look right...I suspect it's because I don't have bangs, which makes the wrap around the head look quite different. But I started this morning planning out with the white shirt and some gray shorts to keep a neutral palette to try pulling off the headscarf. When headscarf again didn't look good, I scrapped that outfit idea. Didn't feel like the gray shorts without the scarf, so I ended up grabbing my leopard-print skirt off a nearby pile of clothing and swapping that out. But the waistline didn't look quite right, so...Eureka! I could use the scarf as a belt! Sometimes it amazes me how complicated/random the process of putting together an outfit can be.

I still want to try the scarf as turban idea, though. I'm also resisting cutting myself some bangs (which I haven't had since I was probably 10). Though I did add some layers into my hair yesterday morning...I think it works (or at least I think it doesn't look like I randomly cut pieces of my hair shorter, which was basically the technique). 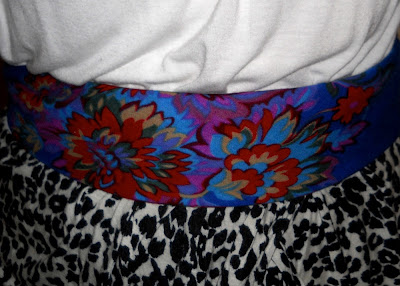 My camera's been having trouble over the last few days, which seems to be attributable to the memory card. Thus the limited pictures of this outfit. Too bad, as I really liked it... more pattern mixing than I normally do, comfortable, and fun.

On another note, I can't believe it's already nearly the end of August. Orientation has started here at school for the class of 2015 (feeling older? Check!), and classes will start next week. I'll probably sit in on a couple of classes, though with my Ph.D. program I don't have any required classes. Mostly starting to prepare for my general exams. Anyone have terrific plans for the remainder of the summer? Things to make sure I do before it's fall already?
Posted by Elly at 10:15 AM